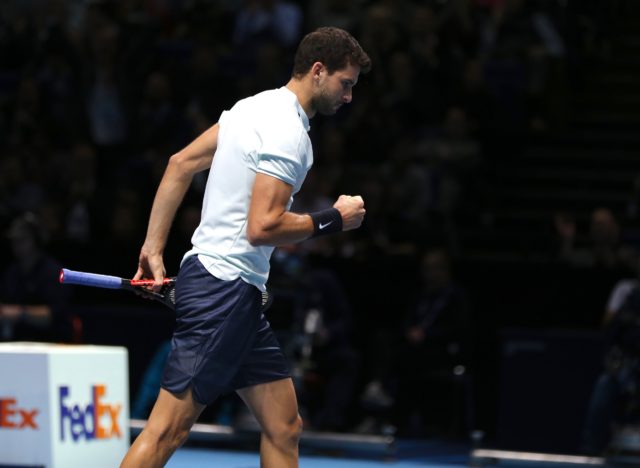 Almost a solid year of ATP tennis has passed under the bridge and it all culminates in Sunday’s World Tour Finals showpiece between David Goffin and Grigor Dimitrov.

Goffin arrived at the O2 on the back of impressive wins in both Tokyo and Shenzhen and with Belgium’s Davis Cup final with France on the horizon, had more to play for than most.

Lady Luck may have fluttered her eyelashes at him but he took his chance, grabbing her by the hand by toppling an ailing Rafael Nadal in his opening match, before brushing aside Dominic Thiem.

Then, looking like a man capable of leading Belgium to a maiden Davis Cup title, he came from behind to beat Roger Federer in three sets in Saturday’s semi-finals.

If he can carry on that form then France might as well not turn up in Lille but his only defeat to date in London was conveniently excluded from the above.

That was because it came at the hands of Dimitrov, a man who appears to be growing with confidence every time he steps onto the court but is still unsure of how good he actually is.

Victory at the Cincinnati Masters marked the latest chapter in his volume of flirtations with the big time and a win on Sunday is maybe what it takes for him to finally breakthrough.

Like Goffin, he came from behind to beat Jack Sock in the semi-finals, perhaps while knowing that Federer’s elimination meant he was the favourite for glory.

Dimitrov has long been nicknamed ‘Baby Fed’ for the likeness in his style with the Swiss maestro and has won four of his previous five ATP Tour meetings with Goffin, including of course his 6-0 6-2 triumph on Wednesday.

This is why he is rightly the favourite to do the job again on Sunday, with a two sets victory at 1/1, while he is 11/4 to do it in three.