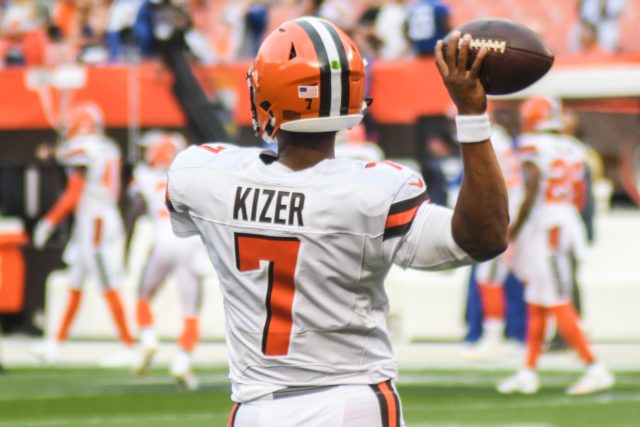 UK NFL fans will get the chance to cheer on the ultimate underdog on Sunday when the winless Cleveland Browns look to cause an upset against the in-form Minnesota Vikings.

It has been another season of pain for Browns fans, going 0-7 thus far, meaning it is now just one win in the last 25 matches for the franchise.

Losing comes naturally to Cleveland, despite a raft of high draft picks, and coach Hugh Jackson appears to be on a very warm seat having failed to stop the rot.

Quarterback has been a perennial issue for the Browns, trying out 29 different QBs since returning to Cleveland in 1999, with the latest failure being fourth-round draft choice DeShone Kizer.

Kizer faces another tricky afternoon at Twickenham on Sunday against the fourth-ranked defence in the NFL, especially with tackle Joe Thomas missing.

The Vikings have 21 sacks on the year and you can expect that number to increase significantly against a Browns offence that struggles to run or pass the ball.

The Browns chances on defence have not been helped by an injury to Myles Garrett, who is a major doubt for the game, and that will make Vikings’ quarter-back Case Keenum’s job a little easier.

Keenum has been unpredictable since replacing Sam Bradford as QB and the Vikings have relied heavily on the run to get them over the line in matches.

However, believe it or not given they are terrible at most things, Cleveland haven’t been too bad at stopping the run this year, meaning Keenum’s passing might be put to the test.

Even with a sub-standard QB, the Vikings have far too much quality not to win this game, hence why they are 2/9 on the money line, and we could even be looking at a third shut out in four games in London this year.

The Vikings at 10/11 to cover the spread at -9.5 appeals, while under 38 points at 10/11 in the game total market could be a sound choice if the Browns can’t figure out the Minnesota defence.

The ‘Dawg Pound’ are desperate for something to celebrate and games in London have thrown up some crazy results in the past, but a Cleveland win on Sunday? You must be barking.