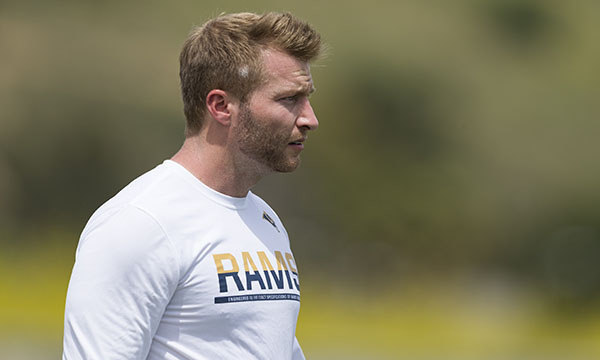 The LA Rams make what could be the first of two visits to U.S. Bank Stadium this season on Sunday when they face off against another pretender to the NFC Championship, the Minnesota Vikings.

The Rams have been the surprise package of the 2017-18 campaign and sit at 7-2 going into this weekend, having won the last four to be in with the chance of a genuine run to Super Bowl 51 which is in Minnesota.

The NFL’s youngest head coach, 31-year-old Sean McVay, has got the LA offence flying, averaging a league-high 32.9 points per game.

The defence has stayed strong as well, leading the NFL in takeaways. All that stacks up to them being the preferred choice at 23/20 for what is easily game of the week.

Minnesota are also at 7-2 and have a strong defence, but back-up quarter-back Case Keenum is still to convince and could be the deciding factor in this clash against his old team.

The Bears might have a top-10 ranked defence, but could not stop an Aaron Rodgers-less Green Bay Packers last week so the Lions, who are averaging 27.1 points per game this year, are taken at 25/26 to win in Chicago.

New Orleans can expect a shoot-out when the Washington Redskins come to town on Sunday.

The Saints now carry a triple threat in the form of surgical quarter-back Drew Brees and the running back pair of Mark Ingram and Alvin Kamara.

They easily swatted aside the Bills last week, as predicted, and should do the same at home to a banged-up Washington, starting at -7.5 on the spread.

However, it is over 51 total points which takes the fancy here, with Skins QB Kirk Cousins still putting up big numbers despite a lack of options.

The final tip of the week comes in the form of Kansas City, off a bye week, to cover the -10 spread at 10/11 when they travel to the New York Giants.

These two both have terrible defences, ranked 30th and 31st respectively, but at least the Chiefs get it going on offence.

The hapless Giants looked to have given up on the season when losing to the previously winless 49ers last week and should be easy beats for Alex Smith and co.