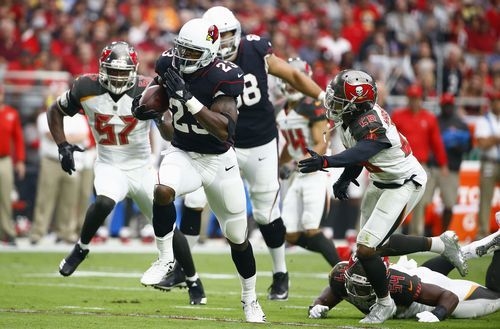 The Arizona Cardinals will look to stop the red-hot LA Rams in their tracks when the two clash at Twickenham in a mouth-watering NFC West showdown.

It is not too often the NFL puts on a divisional contest on this side of the pond and this one looks set to make up for the two snooze-fests that preceded it this year at Wembley.

The Rams boasted the league’s top scoring offence coming in to Week Seven, a remarkable turnaround from the struggles they endured under previous head coach, Geoff Fisher.

Young whippersnapper Sean McVay has done a remarkable job turning the ship around, bringing out the best of running back Todd Gurley, who has seven touchdowns this season and looks dangerous whether receiving or rushing.

Improvements to the receiving core have also helped quarter-back Jared Goff. The 23-year-old is looking much more like a No.1 draft choice this season.

The special teams have come up with some big moments in the Rams’ season as well and all this leads to them sitting atop the NFC West at 4-2 and being priced at 4/7 to win on Sunday.

You’d think you should back the Rams then, given they also have experience of playing at Twickenham, but here is why you should be siding with the 6/4 Cardinals:

When LA has come up against good, experienced defences this season they have come unstuck. Arizona are just that, not letting any one single player rush for 100 yards this season. They will look to repeat that trick against Gurley and force Goff to try and beat them.

On the offensive side of the ball, Adrian Peterson looks to have massively improved the rushing offence of the Cards, going for over 100 yards and two touchdowns in his debut against the Tampa Bay Buccaneers.

With the Rams struggling to stop the run, Peterson could have a big day again on his second outing in London this season. Experienced wide receiver Larry Fitzgerald will hope for a day to remember as he continues to defy Father Time, racking up 138 yards against the Bucs last week.

These two look evenly matched on paper and with that in mind, 6/4 is a great price for the Cards, while the more conservative amongst us can get 25/27 on the spread at plus-3.