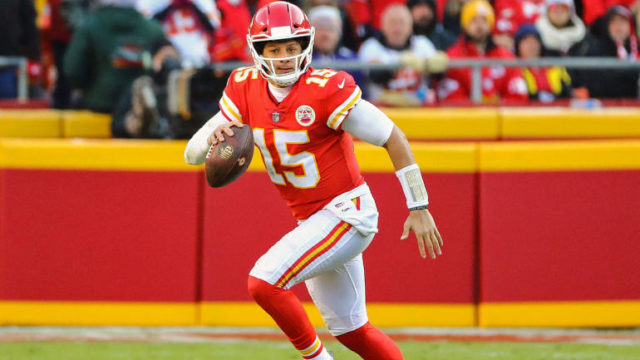 When looking for one of the most improved players in the NFL this season, not many will top the progress made by Kansas City quarterback Patrick Mahomes.

The Chiefs are in Divisional Playoff action on Saturday and with their quarter-back in magnificent form, Kansas will fancy their chances when they welcome the Indianapolis Colts to the Arrowhead.

The 23-year-old Mahomes managed to guide Kansas City to the top of the AFC West at the end of the regular season with an impressive 12-4 record.

Indianapolis have shown significant signs they are getting closer to being the franchise they once were but winning in the Chiefs’ backyard might just be a bridge too far for the Colts.

If there is going to be an upset in the odds in one of the four Divisional Playoffs then it could come on Sunday when the Los Angeles Chargers make the trip to last year’s runners-up, the New England Patriots.

This match-up between quarterbacks Tom Brady and Philip Rivers really looks to be an intriguing one this weekend.

Brady has been there and done it so many times and will be determined to go out on a high, if he is indeed to call time on his spell at the Pats at the end of the season.

However, this Chargers side are on a role at present and, with one defeat in their last seven outings, they might just be able to cause an upset on the road and take a big step closer to the Super Bowl.