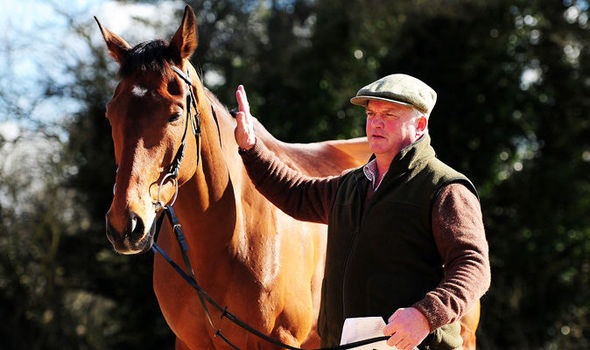 Colin Tizzard believes his popular staying chaser Cue Card is in better form now than he was this time last year.

Now 11 years old and into the twilight of an outstanding career, Cue Card is set to launch his latest season in Saturday’s Charlie Hall Chase at Wetherby, a race he is 5/2 to win.

He landed the Grade Two pot in 2015 and was third last year. It looks probable that Cue Card will be squaring off against 2015 Cheltenham Gold Cup winner Coneygree on Saturday, with the soft ground that now looks likely to prevail being in favour of Mark Bradstock’s charge.

Cue Card got the better of Coneygree to the tune of 15 lengths in the Betfair Chase at Haydock last November, though he will be 6lbs worse off for Saturday’s race.

Tizzard is happy with his charge, but he admits that Cue Card may not be having another tilt at the Gold Cup later in the season.

“I think he’s better this autumn than he was 12 months ago,” said Tizzard. “We took him to Wincanton for a gallop and he finished eight lengths ahead of a 155-rated horse.

“After Christmas it’ll be Ascot [for the Ascot Chase] and then on to Cheltenham where we’d have a good think about the Gold Cup because he’s fallen in it the last twice, and maybe the Ryanair is an option.”

Coneygree meanwhile may have had his troubles in recent seasons but he ran a stormer when third behind Sizing John at Punchestown in April and Sara Bradstock, assistant trainer to husband Mark, feels he too remains capable of showing his best form ahead of the Charlie Hall showdown.

“We’d be giving all of those bar Cue Card weight in a handicap but we’re getting weight off a lot of them on Saturday. You’d have to hope that he goes there with a very good shout,” she said.

“He ran a hell of a race in Ireland and he came on for that, he needed that to give him confidence after the injury to a front leg and since then he’s really come together.

“I genuinely think he’s as good as ever. He’s ten but he has no miles on the clock and he hasn’t really got any speed to lose as he never had any. There isn’t a top gear to lose.”