Aidan O’Brien’s battalion of runners, combined with a domination of the key trials, ensures the Ballydoyle maestro is expected to land his seventh Epsom Derby on Saturday but the opposition is serious and might foil him.

A field of 13 have been declared for the world’s premier Classic and O’Brien trains more than half (seven) of the remaining contenders.

Sir Dragonet, the mount of Ryan Moore is the 5/2 favourite after a Chester Vase romp but he lacks the experience of some of his rivals and perhaps stablemate Broome at 9/2 can see Donnacha O’Brien follow in the footsteps of brother Joseph to win this race.

Away from the Ballydoyle masses, there are some rock-solid contenders.

Winner of York’s Dante Stakes in May, Hughie Morrison’s star was duly supplemented into this race and is, like Sir Dragonet, progressing rapidly. Amid the humdrum over Too Darn Hot’s failure to reel him back in the Dante, it shouldn’t be missed that he did his job ever so well once in front.

Oisin Murphy is riding with confidence and they look sure to have a big say in this race. Telecaster is the leading British-trained contender in the betting and is a proper Derby sort.

If you like the form of Telecaster then it’s tough not to also give a chance to Bangkok, as Andrew Balding’s colt had the subsequent Dante winner behind when winning a maiden at Doncaster in April.

He’s since gone on to take the bet365 Classic Trial at Sandown in strong fashion – one of the few key Derby trials to get away from Team O’Brien. Silvestre De Sousa rides and it’s worth noting that the champion jockey has ridden more winners around Epsom than anyone else. He’s yet to land the Derby but has a great chance here.

For the final dart against the Ballydoyle contingent, look no further than 2,000 Guineas fourth Madhmoon. He was clearly outpaced on the Rowley Mile but it’s worth remembering he beat Broome as a two-year-old.

It would be quite the story should he hand veteran trainer Kevin Prendergast victory in the Derby and Madhmoon stayed on nicely in the  Guineas, strongly suggesting that his longer trip will be favourable for him. He’s a solid each-way player. 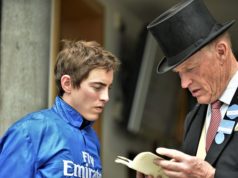