Royal Ascot, Britain’s most valuable race meeting, gets underway on Tuesday and there are a number of interesting contenders for the feature races across all five days.

The St James’s Palace Stakes attracts horses that have run in the English, French and Irish 2,000 Guineas and there is another star-studded line-up this year, with Phoenix Of Spain the pre-race favourite at 7/4.

Charlie Hills’ charge won the Irish 2,000 Guineas at the Curragh last time out, getting the better of Too Darn Hot, who is 9/4 to gain revenge at Royal Ascot with the experienced Frankie Dettori on board.

Aidan O’Brien has two entrants in Wednesday’s Group 1 feature race and his best chance looks to be in the form of Magical, who is currently the 2/1 favourite to claim all the spoils.

Williams Haggas’ Sea Of Class is also expected to challenge at odds of 5/2, while Sir Michael Stoute will be hoping Dettori can lead 9/2 shot Crystal Ocean to glory.

Ascot’s oldest surviving race, the Gold Cup, is the premiere on Thursday and John Gosden’s Stradivarius, which has Dettori booked in for the ride, looks like the one to beat.

Charlie Appleby’s Cross Counter, who won the Dubai Gold Cup at Meydan last time out, is also expected to put in a strong challenge for glory, while Dee Ex Bee, Kew Gardens and Flag of Honour have bold claims.

Aidan O’Brien’s Hermosa heads the field going into the Group 1 Coronation Stakes as the filly looks hard to beat, having added to her 1000 Guineas at Newmarket with an emphatic success in the Irish equivalent at the Curragh.

The same trainer also has Happen, Just Wonderful and So Perfect to call upon, while the Michael Bell-trained Pretty Pollyanna is expected to put in a big challenge at 13/2, the same price Castle Lady is.

One of the world’s great international sprint races, the Diamond Jubilee Stakes, is the showpiece on the final day of the meeting and 10/3 favourite Invincible Army will be hard to beat.

The four-year-old is gunning for a third straight victory, having won at Doncaster and York, but 11/2 Inns Of Court shot appears to be the closest challenger.

Blue Point is also worth a note at 13/2 while City Light and The Tin Man are priced 8/1 and 10/1 respectively. 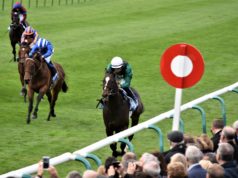 Angel to soar at Epsom