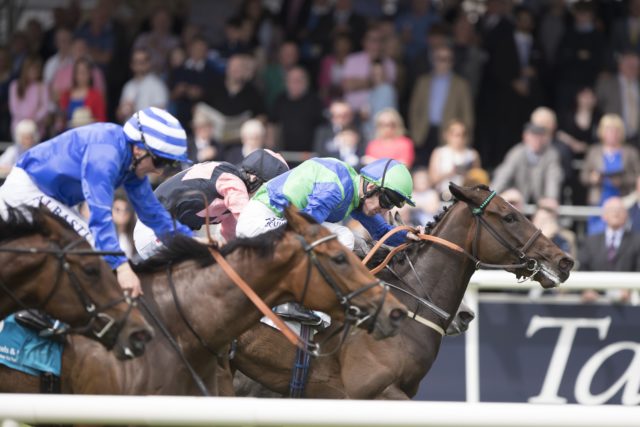 Trainer Clive Cox is keeping his fingers crossed for a dry couple of days at Haydock ahead of Saturday’s Sprint Cup but, as yet, he sees no reason why favourite Harry Angel will miss out.

Last spotted winning the July Cup at Newmarket, Harry Angel shattered the course record over Haydock’s six-furlongs in the spring when romping to victory in the Sandy Lane Stakes.

That was achieved on a firm surface but 12mm of rain already this week means conditions at Haydock are currently described as Good, Good to Soft in places.

There is a distinct possibility of soft ground come Saturday, but Cox will take some relief knowing that fresh ground not used for five weeks will be put back into play for the track’s premier Flat race of the year.

Harry Angel is 2/1 favourite to add the Sprint Cup to his summer Group One at Newmarket and his trainer remains upbeat whilst keeping his fingers crossed for fair weather in between times.

“He showed the ability to break the track record in the Sandy Lane which is something we’re very proud of and has continued an upward curve since,” said Cox.

“He’s got form on good to soft ground, winning the Middle Park, and I’m quite relaxed really, but would obviously prefer less rather than more rain.

“I wouldn’t say there’s a doubt about him running as he’s performed on a softer surface, but I realise how potent he was on a drier surface.”

The likes of July Cup third Brando at 3/1, since a winner of a Group One race in France and Diamond Jubilee winner The Tin Man, second in the Sprint Cup last year and 8/1 to win now, mean there is going to be plenty depth to the Sprint Cup line-up but Cox wouldn’t trade places with anyone in the race.

There could be plenty more to come from Harry Angel as he continues to mature.

“I think with any sprinter, with continued maturity, there’s the potential for more improvement and I’m pleased with him, he’s in good form,” he added.

“We’re very happy, we’ve had a healthy timescale since the July Cup and he’s trained very well. I wouldn’t swap him for anything.”