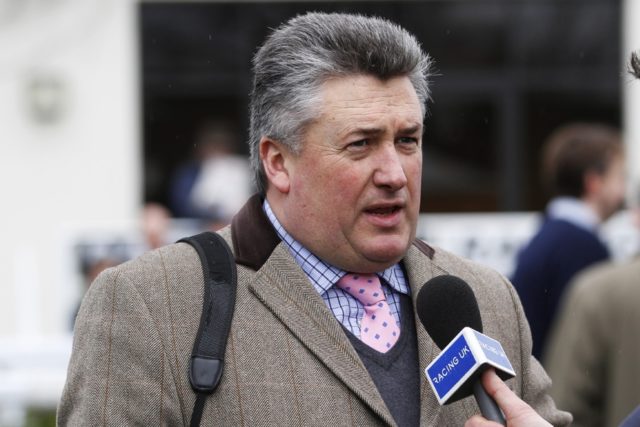 Paul Nicholls has trained the winner of the Betfair Chase at Haydock on six occasions and the Ditcheat handler feels Bristol De Mai could be the one to beat this time around.

Ten-time champion jumps trainer Nicholls is without a candidate for the Grade One three-miler on Merseyside this year, but he feels Charlie Hall Chase winner Bristol De Mai has a great chance of catching reigning Cheltenham Gold Cup hero Sizing John on the hop.

Jessica Harrington’s seven-year-old is the 11/8 favourite for the Betfair Chase, as he bids to begin a quest for the Jockey Club Triple Crown and the £1m Bonus that comes with it.

Bristol De Mai took advantage of Cue Card and Coneygree failing to fire at Wetherby last weekend to win the Charlie Hall and Nicholls suggests he’ll have decent claims going to Haydock on the back of that win.

“While Sizing John has shown his ability and class by winning the races he has, it will be no easy feat and there are some really smart horses coming along,” he said.

“If it is testing ground in a fortnight, I can see Bristol De Mai making him go a bit. He (Sizing John) needs to win first time out and be on his mettle straight away. You have got to be on the top of your game in all three of those [Triple Crown] races as they are not easy to win and they are all different disciplines.”

Bristol De Mai is 9/4 to win the Betfair Chase at Haydock on Saturday 25th November. Cue Card, a faller last weekend at Wetherby, has also been confirmed for the race by Colin Tizzard and is a 6/1 chance to win for the fourth time in five years.

Like Nicholls, Bristol De Mai’s trainer feels there is a half chance of catching an undercooked Sizing John out on his reappearance and, should Bristol De Mai prevail, it will be onto Kempton on Boxing Day for a shot at the King George VI Chase.

“He [Bristol De Mai] was really good on the day at Wetherby and I was delighted with him. Sizing John could just need the run (at Haydock) and he might just have that advantage over him, but I’ve no idea what Sizing John has been doing at home,” said Twiston-Davies.

“If he was to win he would go for the King George, the Triple Crown would have to be on your mind – a £1m bonus has got to be on anyone’s mind.”