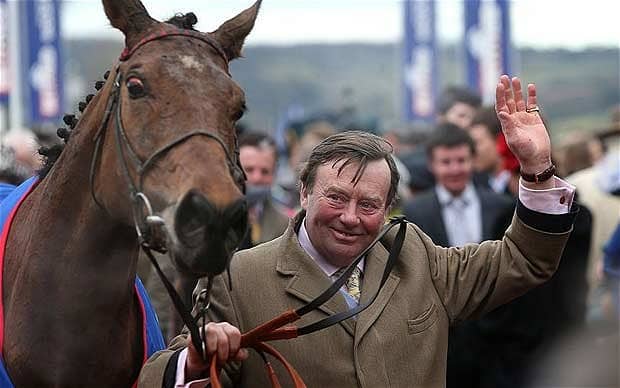 Champion trainer Nicky Henderson has signalled his intention to prioritise the King George at Kempton Park with his exciting chaser Might Bite.

Last year’s outstanding novice, Might Bite is a bold and daring frontrunner with one or two quirks in his armoury.

At Kempton last year, he was set to deliver a spectacular success over the King George course and distance when he crashed out at the final fence whilst holding a wide-margin advantage in the Kauto Star Novices’ Chase.

Three months later at the Cheltenham Festival he won the RSA Chase in scarcely believable fashion.

Again leading comfortably, he produced a poor jump at the last before idling and then veering dramatically right on the run-in, allowing stablemate Whisper to go past him, before rallying incredibly under Nico De Boinville to get back up in the final stride and win.

He ended the season with a much more straightforward success in the Grade One Mildmay Novices’ Chase at Aintree.

Given how well his charge was running when he came to grief in the Kauto Star last Christmas, Henderson is very keen to get Might Bite back to Kempton Park on Boxing Day, where he is 10/3 to land the King George VI Chase.

The Seven Barrows handler feels Might Bite is deceptively quick, a theory he believes is supported by the pressure his pacesetting imposes on his rivals.

“The King George is going to be his first main objective and that’s on the grounds of what he was going to do in the Kauto Star had he not fallen at the last – it would have been a mighty performance,” said Henderson.

“It doesn’t look like he’s going very quickly when you’re watching him, but he must be because two-thirds of the way through they [the opposition] have had it.”

Last year’s winner Thistlecrack shares favouritism at 10/3 for the King George while Jessica Harrington’s Cheltenham Gold Cup hero Sizing John is a 4/1 chance to become the first Irish winner of the Boxing Day showpiece since Kicking King in 2005.