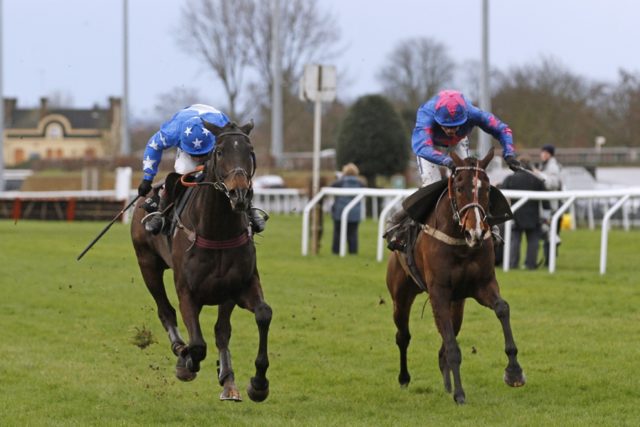 It’s the rematch we’ve wanted to see since Cheltenham in the spring and, magically, we get it in the first Grade One staying chase of the winter – Native River vs. Might Bite – the sequel!

The Betfair Chase at Haydock has attracted a quality field of five runners, with last year’s winner Bristol De Mai and 2016 King George hero Thistlecrack amongst them, but all eyes will be on Cheltenham hero Native River and runner-up Might Bite.

The general consensus is that better ground at Haydock will see Might Bite reversing Cheltenham form with Native River and the betting reflects that. With little to decide between them, Colin Tizzard’s blue-riband winner looks a shade too big in the market.

They went toe-to-toe around the Cotswolds in March, matching one another stride for stride for three miles. Might Bite appeared to be travelling best on the run down to two out, but Native River wasn’t for passing. The further they went up the hill, the more he had in his locker it seemed.

That is the swaying vote here. The Betfair Chase was once a three-mile test, but is now much closer to the 3m2f of the Gold Cup, and that can be crucial for Native River, a stamina-laden eight-year-old that we haven’t necessarily seen the best of yet.

There’ll be no hiding place here, with both Bristol De Mai and Thistlecrack likely to have some say, and Richard Johnson’s mount is less likely to be found wanting at the death. Next month’s King George is tailor-made for Might Bite but Native River is fancied to get the verdict again.

Paul Nicholls runs Clan Des Obeaux in the feature although the Ditcheat handler is infinitely more likely to have some success in the C&D contest that follows.

Nicholls doesn’t have the firepower of days gone by but the former champion trainer remains a master of placement and, having easily won at Taunton nine days ago, Braqueur D’or can defy a 4lb ratings hike to add this prize to his tally.

Harry Cobden rides and will be full of confidence in the midst of a sparkling run of form that has yielded 13 winners from 40 rides for a strike-rate in excess of 32 per cent recently.

Captain Redbeard has an admirable record over these Haydock fences but he’s conceding weight to his younger rival here and, on the back of a positive display at Taunton, Braqueur D’or and Cobden can give Nicholls the consolations prize on Merseyside.

The folly of backing impressive novice hurdlers stepping into open company was laid bare once more at Wincanton when We Have A Dream was picked off in the Elite Hurdle recently.

Nicky Henderson’s charge lost his unbeaten record over sticks but came away with plenty of credit after attempting to make all.

Verdana Blue scored, while the re-opposing If The Cap Fits finished seven lengths clear of We Have A Dream (third) in the end.

A trip that was shy of two miles on his seasonal bow wasn’t ideal and, like many from Seven Barrows, We Have A Dream can be expected to improve second time out.

A Grade One novice scorer at Aintree over 2m1f in the spring, this trip should be much more suitable and with Barry Geraghty taking over in the saddle, We Have A Dream is fancied to have his revenge on the Harry Fry-trained Wincanton runner-up.