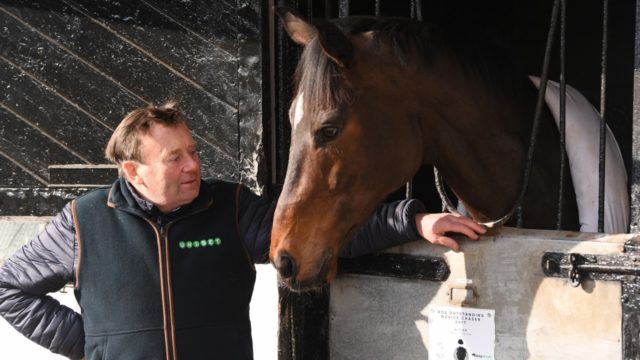 It’s Cheltenham Trials Day on Saturday afternoon and champion jumps trainer Nicky Henderson has a typically strong hand to play from his bang in-form team. He could be putting smiles on the faces of leading owners Simon Munir & Isaac Souede.

This Triumph Hurdle rehearsal – like the main event – is a race Henderson does particularly well in. He won last year with Apple’s Shakira and has another likeable French import in Adjali now.

A winner for Guillaume Macaire in his native land before departing for these shores, he made a smooth, winning start at Market Rasen in December and has since gone down all guns blazing in the Grade 1 Finale at Chepstow behind Quel Destin.

He concedes weight now but still looks the one to beat under Daryl Jacob as they bid to get the two-tone green silks of Messrs Munir and Souede into the winners’ enclosure early in the afternoon.

This time last year it was Terrefort making waves in these colours after coming across from the Macaire yard.

He would win four of five starts for Henderson as a novice, his only defeat a creditable second behind the mare Shattered Love in the JLT here at the Festival in March.

He banished that memory when tackling 3m+ for the first time in the Mildmay at Aintree, taking that Grade 1 in good style from Ms Parfois. His reappearance at Sandown was underwhelming but he came back lame and must be forgiven.

With the yard in tremendous form (36% strike rate, 10-28 recently), Daryl Jacob’s mount is worth giving another chance over a trip that should allow him best the gallant Frodon in the closing stages.

There is a decent turnout for the Cleeve Hurdle, with a dozen lining up, although most have some questions over them.

Lil Rockefeller and Black Op divert here after mixed fortunes chasing this season and while Tom George’s charge is much-respected, he can be opposed. The likes of Sam Spinner and Unowhatimeanharry failed to get around in the Long Walk last time at Ascot, where Paisley Park fended off West Approach to win.

Emma Lavelle’s charge is unbeaten this term in staying hurdles and looks to still be on the upgrade, unlike a fair few of his rivals here.

This division is one that often sees domination from an improving sort, so the hope is that Paisley Park will stamp his authority on it now.

Last year’s winner Agrapart has been out of sorts and while the return to Cheltenham may assist, there likely won’t be quite enough mud flying to see him home in front.