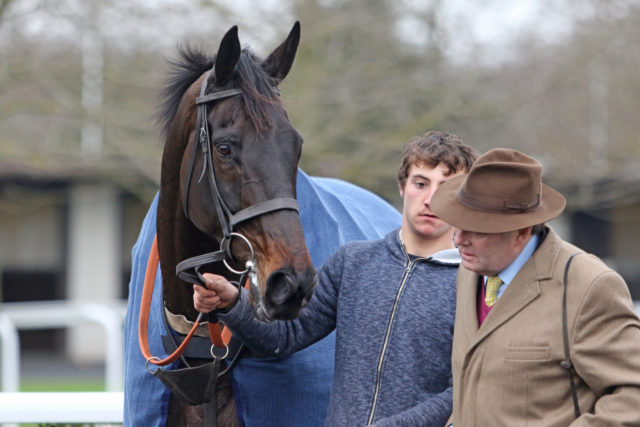 This weekend brings the first big Grade 1 staying chase of the season in Britain as Haydock gets set for the Betfair Chase, a race already littered with wonderful tales.

Quite a few of those have been written by trainer Paul Nicholls, who famously landed four renewals with the brilliant Kauto Star.

Nicholls is without a runner in the feature event now but could star on the undercard, while Cue Card, the most popular chaser in training, is fancied to write another Betfair Chase fairytale by equalling Kauto Star’s tally of four wins in the race.

Nicholls is short of that sort of firepower these days and has been relieved of the champion trainer crown by Nicky Henderson.

The 2m5f Graduation Chase (13:15) has been won in each of the last five years by a Nicholls runner, and at odds of 5/2 Clan Des Obeaux is fancied maintain that run.

The five-year-old reappeared last month in a two-horse race with Henderson’s Whisper at Kempton and Nicholls will have been quietly content to push that 157-rated rival to with a half-length.

Clan Des Obeaux should come on for the run and, if doing so, Harry Cobden’s mount is fancied to give away weight to the likes of Big River and Born Survivor, given that Whisper is rated 12lb clear of anything the Ditcheat runner meets at Haydock now.

While Cue Card is the veteran of maximum of interest at Haydock, it might also prove profitable to take a chance on Zarkandar in the Betfair Stayers’ Handicap Hurdle (14:25).

Nicholls’ ten-year-old was a C&D winner in February at Grade 2 level and could be primed for a big run fresh in this competitive heat.

Just shy of top class as a staying hurdler in his prime, early odds of 22/1 are perhaps too quick to write Zarkandar off.

Of course, very few will be willing to do that with Cue Card, sure to be willed on by the packed Haydock enclosures in the Betfair Chase (15:00).

While his trainer Colin Tizzard has been at pains to suggest Cue Card, now 11, is “as good as ever” that may not strictly be true, but he could still be up to winning this.

Kauto Star famously wound back the clock to win this very race in 2011 and Cue Card can emulate him in more ways than one by doing similar now.

Cue Card, available at 15/8, despite his trainer seemingly believing he is Peter Pan-like, does not have a lot of big days left and so nothing will be left behind here.

This Haydock race has already created some unforgettable moments since its inception in 2005 and Cue Card scoring now would certainly be another.