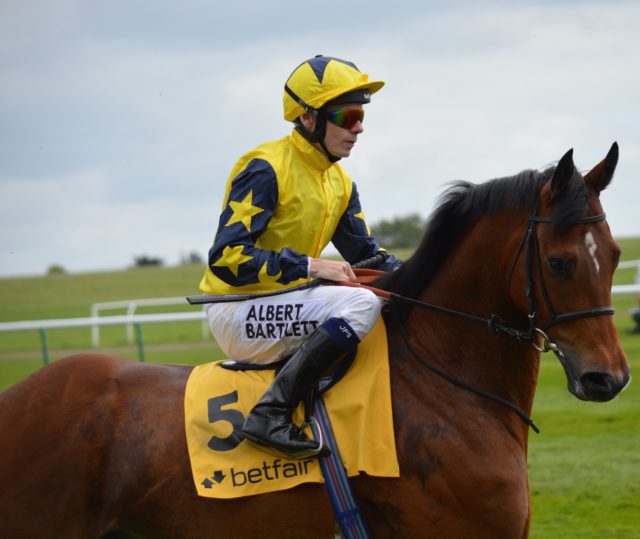 Desert Encounter may have proved no match for the brilliant Enable last time out but he’s got a perfect chance to bounce back at Newbury on Saturday afternoon.

With the Ayr Gold Cup card lost to the Scottish weather, Newbury takes centre stage on Saturday and there are two excellent Group races down for decision.

The first of those is the Dubai Duty Free Legacy Cup Stakes (14:15) over one mile and three furlongs where David Simcock’s Desert Encounter is a leading fancy at 7/2.

Last seen finishing down the field behind the brilliant Enable in the King George at Ascot in late July, Desert Encounter should be primed for a big run having enjoyed a nice break since.

Never posing any sort of threat at Ascot behind John Gosden’s filly, it seems wisest to suggest that run is best left with a line drawn through it.

Prior to that Desert Encounter had finished an excellent third behind Ulysses and Barney Roy in the Coral Eclipse at Sandown.

Since late 2015, Desert Encounter has won five of his ten races and finished outside the front three just once. In that time, his rating has risen steadily from a mark of 80 to the current 114 he’ll race off at Newbury.

The five-year-old gelding out of Halling could still have more to offer and is tipped to land this prize dropping back into Group 3 company under Sean Levey.

The Mill Reef Stakes (14:50) is the centrepiece of the afternoon at Newbury. Won last year by none other than Harry Angel, the six-furlong Group 2 has attracted a quality line-up and has an open look to it.

That said, it is hard to ignore the claims of the George Scott-trained James Garfield at odds of 7/2.

Edged out in the shadows of the post last time in the seven-furlong Group 3 Acomb Stakes at York, the drop in trip and the likelihood of a better surface both appear to be in his favour now.

James Garfield is not short of a bit of speed and Frankie Dettori is booked to steer again having got a nice tune out of him on their first outing together at York.

At just over 20/1, Desert Encounter and James Garfield could land punters a Newbury double on Saturday afternoon.