Less than one week to go before the Cheltenham Festival begins, greeted as it always is by the famous roar when the starter lets the runners go for the curtain-raising Supreme Novices’ Hurdle on Tuesday.

Next week in the Cotswolds is four days of racing without compare. Royal Ascot may have the pageantry and the million-pound thoroughbreds in June, but there is something oh-so alluring about the jumping superstars that bring Prestbury Park to life in March.

It is hard to pinpoint one aspect of Cheltenham that makes it stand out but, perhaps, it is the longevity of the horses that adorn it that allows us to buy into the mystique.

The racing blue-bloods of the Flat are often swept off to stud as four and five-year-olds, after brief careers on the track, with owners and breeders knowing that the real money is going to be made in the breeding shed.

For national hunt horses, there is a chance to establish and embellish their place in the sport’s tapestry over a prolonged career, more often than not.

Take Cue Card for example, a 9/1 chance to win the Ryanair Chase at Cheltenham on Thursday. He has been for some time ‘Britain’s most popular chaser’. His longevity and continued brilliance in top-level races have earned him that moniker. He is the darling of the racing public.

That adoring public will long to see the brilliant farewell of a third Cheltenham Festival win, eight years apart from his Champion Bumper success. His most recent Ascot appearance suggests the 12-year-old has it within his grasp.

To score, he’ll likely need to pass the unflappable Un De Sceaux, 11/4 to retain his crown. Once a rogue tearaway with his own notions, he is now ten-years-old and described by his trainer Willie Mullins as an ‘iron horse’. Few are as exciting to watch, that’s for sure, and the Ryanair could be one of the races of the week.

In the Stayers’ Hurdle we’ll see 10/1 chance The New One appearing in his sixth straight Cheltenham Festival. He’s won only as a novice in 2013 but performed admirably in four successive Champion Hurdles since.

Now, at 10, he gets a chance to run over three-miles for the first time, answering a new question about his stamina when he does. Trained at nearby Naunton by the buoyant Nigel Twiston-Davies, a win here could be amongst the most popular of the week on track.

Comebacks are also a virtue at the Cheltenham Festival – who will forget Sprinter Sacre’s second coming in the Champion Chase of 2016 after well-documented heart problems? This year, it is trainer Nicky Henderson that saddles the favourite, Altior, unbeaten over jumps and bidding for a festival hat-trick.

He is odds-on to win, and there is always a lustre about an unbeaten jumper, until the veneer is smashed. That was the fate of Douvan in last year’s Queen Mother Champion Chase.

He has not raced since – were he a Flat star, he’d almost certainly be retired now – but instead he will bid to inflict similar misery on Altior as befell him a year ago. Douvan is 4/1 for Cheltenham redemption, a victory that would be another rich page in festival folklore.

The Cotswolds crescendo will boil on Friday for the Gold Cup, the Blue Ribband race, and the centrepiece of this glittering four-day sporting bonanza.

Last March, Might Bite had festival success wrapped up when he jumped the final flight in the RSA Chase with a significant lead. Then he veered off right and idled badly, seemingly handing victory to Whisper.

In a virtuoso display of determination and sheer guts, he rallied and charged up that famous Cheltenham hill to reclaim his race in the last stride.

Faultless since, he is the 3/1 favourite for the Gold Cup on Friday. He has not encountered Cheltenham and its iconic hill since that day last March. If he does jump the final obstacle in the lead, there will be a collective intake of breath rarely witnessed before as he begins the ascent to ultimate Festival glory.

As trainer Nicky Henderson freely admits, no one can be sure what he’ll do, until he gets there. Cheltenham doesn’t have a script you see, just a blank canvass waiting to be coloured in. 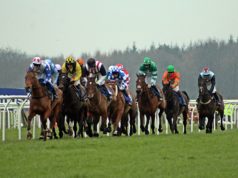