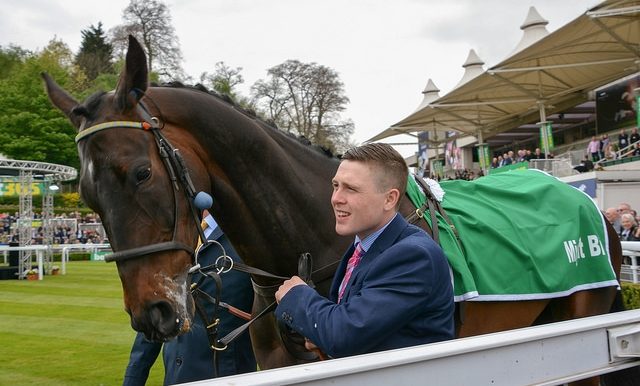 The Cheltenham Festival is within touching distance now and is so close you can almost feel it! The cold snap has deprived us of jumps racing over recent days so there has been extra time to pick out horses that will whet the appetite in the Cotswolds, and maybe even turn some punting profit!

Getabird is likely to be strong favourite in the curtain raiser but don’t write off the Nicky Henderson-trained Claimantakinforgan. He’s already got Festival form on his side, having finished third behind flying filly Fayonagh in last season’s Champion Bumper, and looked good in winning his first two starts over timer at Newbury and Ascot. He was below his best at Musselburgh last month, in his final prep run, but represents a yard with three previous wins in this race and at a nice each-way price of 11/1, Claimantakinforgan could go well back in the Cotswolds on spring ground.

Just the second race of the four-day Festival but this Willie Mullins-trained hot-pot will be a key player for punters. He was an above-average hurdler although just short of being top drawer. This season he’s looked better than ever, winning three starts over fences. He has genuine speed for two miles and is both fast and accurate over his obstacles. That is a potent combination in bidding for Arkle glory and Footpad is the standard bearer coming into this race where five of the last six favourites have prevailed.

Plotting might be the key word for this aptly-named Gordon Elliott-trained runner in the closing race on day one. The Irishman was leading trainer at the Festival for the first time last March and has another strong panel for 2018. De Plotting Shed has been allotted a mark that is 7lb lower than his hurdles rating for this contest and that will thrill his trainer. He’s 5/1 to win this race and his run behind RSA Chase favourite Presenting Percy earlier this season stands out as the best piece of form on offer. The jigsaw pieces are falling into place nicely for Elliott.

The most talked about horse in Britain and Ireland this winter, the Gigginstown House-owned Samcro is the ‘hype horse’ coming to Cheltenham. For many, he will be the ‘Festival Banker’ but can he justify his perch? Samcro hasn’t put a foot wrong in winning three times over hurdles so far and is seemingly at home over any trip and on any ground. The O’Leary’s and trainer Elliott could have picked any of the novice hurdles at the Festival and he’d be favourite to win. They pinpointed this race, however, and that must be noteworthy. Samcro has been touted as a Gold Cup winner of the future by many and here he gets his first sampling of the Cheltenham Festival experience.

Last year’s Pertemps hero Presenting Percy is a massive player for the shrewd team of Pat Kelly and Davy Russell, who has had at least one Festival winner every year since year dot it seems, but the claims of 7/2 chance Monalee are just as strong. Henry De Bromhead’s charge was a faller at Christmas but he went back to Leopardstown in February and put things right. He jumped faultlessly on that occasion and if he gets his jumping right again at Cheltenham, it will require a gutsy contender to go by him coming up the hill, based on the way he batted off the repeated challengers last time out.

There is always an aura about an unbeaten jumper and Altior brings an unblemished record to the Champion Chase as he bids for a third Cheltenham Festival win on the bounce. He’s fast becoming the most exciting jumps horse in training and Nicky Henderson is finding it increasingly tough to mask his love for this horse. Following a wind operation, he looked as good, if not even better than ever, when cruising to success in the Game Spirit at Newbury on his seasonal bow and his handler expects significant improvement. This is a must-see contest for any racing fan – can anything lay a blow on the mighty Altior?

When the great Willie Mullins refers to an ‘iron horse’ it is time to sit up and pay attention. Un De Sceaux does what Un De Sceaux does. He has in the past been eccentric out in front but, now 10 years old, he is a mature Grade One performer. Albeit he ran away with Ruby Walsh a bit in winning the Ryanair last year, he had enough in reserve to keep his effort up all the way to the winning line despite the critics claiming he’d cut his own throat in front. With Waiting Patiently, Top Notice and the brilliant veteran and former winner Cue Card amongst those ready to launch an assault on his Ryanair Chase title, Un De Sceaux may need to prove himself all over again this time around.

Stayers’ Hurdle – The New One

At last Nigel Twiston-Davies has allowed his will to be bent and The New One goes for the Stayers’ Hurdle over three miles. He has been a standing dish at the Festival since he won the Neptune in 2013 but despite four admirable runs in the Champion Hurdle, he came up just short against the best two-milers around. Jockey Sam Twiston-Davies has been agitating to get him a run in this race for some time but will it prove too late at 10 years of age? They’ll have to bridge a 32-year gap since Crimson Embers (aged 11) won this race if he’s to prevail but The New One is not showing any signs of slowing up. He won a Haydock Grade 2 in gutsy fashion in January on very testing ground and there will be roars of delight if he gives local handler Twiston-Davies another Festival success at the end of this first try over three miles.

I’m not going to hide my feelings for this filly as she looks the ready-made contender for the ‘Festival Nap’ vote at 5/2 in the Triumph Hurdle. The clamour over the French import started shortly before her British debut at the track in October and she scored with stacks in hand. She’s won three trials for this race at Cheltenham already and her Seven Barrows handler has won this race a record six times. Barry Geraghty will be on board and has won the Triumph five times (including three for Henderson). The filly has shown already she’ll fight off the bridle, a big plus, and she also receives a 7lb allowance from the boys she’ll race against. Like hips, stats don’t lie!

Might Bite has his date with destiny in the blue riband on March 16. His unforgettable RSA Chase win last March almost witnessed a great collapse but the fact he veered right, idled on the run-in and seemingly tossed away his prize also gave rise to a brilliant late rally as he denied Whisper on the line, having ground to a halt coming up the hill. Since that moment of lunacy, Might Bite has been near faultless. He won the King George despite duelling with Bristol De Mai early on and is one of the few Gold Cup contenders not to have a blot on his copybook this season. Defending champ Sizing John flopped at Christmas and hasn’t been seen since while Native River might be undercooked, with just one easy win at Newbury behind him. By the time his stage-call comes, he could be bidding to give Henderson the first ever clean sweep of Champion Hurdle, Champion Chase and Gold Cup in one season – and his rivals must not rely on Might Bite faltering up the hill again if they want to stop him. That said, it will be a heart in mouth moment for everyone if he jumps the last in front!

Customers who place 3 single £10 bets with minimum odds 1/2 on the following races will get a £10 free bet to use for Cheltenham: Grimthorpe Chase (March 3), Imperial Cup (March 10).