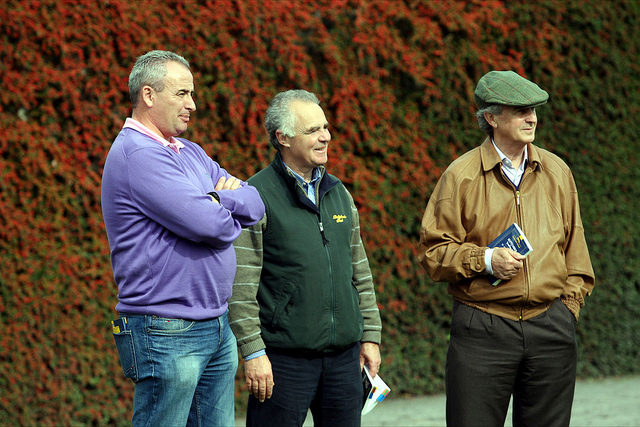 Aidan O’Brien has in the past suggested that surpassing Bobby Frankel’s record tally of Group 1 winners in a calendar year wouldn’t mean all that match to Ballydoyle, but any uncertainty is now gone.

O’Brien’s delight at equally the late Frankel’s haul of 25 top-level successes when Hydrangea scored at Ascot on Champions Day was clear for all to see. The entire Coolmore and Ballydoyle operation will rightly be catapulted to a state of rare joy if and when the landmark wins arrives.

The trainer is responsible for no less than four of the 12 runners bound for Doncaster’s 2017 Racing Post Trophy, a firm indication of how much this record is now desired.

Spearheading the attack is Saxon Warrior, 7/4 favourite to oblige at Doncaster in the hands of Ryan Moore.

He looked pretty impressive as he won a Group 2 at Naas last month in testing ground and is already the ante-post favourite for Derby glory next summer at 8/1.

Seahenge, winner of the Champagne Stakes at Doncaster last month and since seen finishing third in the Dewhurst (where O’Brien trained the first four home) shouldn’t be underestimated for the trainer’s son Donnacha and is each-way value at 10/1 while Seamie Heffernan also has a livewire contender in 4/1 shot The Pentagon.

The last-named hasn’t been seen since July when he made a good impression in winning the Group 3 Tyros Stakes at Leopardstown and he could be much-improved now.

The challenge is strong, for sure, from Ballydoyle but they may thwarted at Doncaster.

The King of Doncaster, Andrea Atzeni, has ridden the winner of the Racing Post Trophy in each of the previous four seasons and will equal the records of Lester Piggott and Pat Eddery if he steers 13/2 chance Chilean home in front.

Up-and-coming Newmarket handler Martyn Meade has outlined his belief that the colt has strengthened considerable since he landed a Listed Haydock race in testing round in comfortable fashion last month. Meade however admits it would be ‘dreaming’ to think he can win the Racing Post Trophy, though he expects to be competitive.

O’Brien’s biggest danger may be his long-time rival Jim Bolger, who brings National Stakes winner Verbal Dexterity to the party.

He was forced to sidestep the Dewhurst after a dirty scope but all is clearly well now with the Coolcullen maestro happy to aim for this lofty prize.

The manner in which Verbal Dexterity accounted for Beckford to score at the Curragh on Irish Champions Weekend last month is arguably the standout piece for form and Kevin Manning’s mount can further galvanise his growing reputation by adding the Racing Post Trophy at odds of 7/2, and thus ensuring that Bolger forces the Ballydoyle champagne to remain on ice for another while at least.