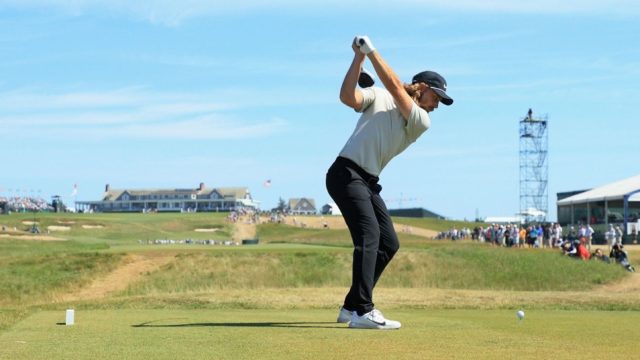 The Open Championship returns to Carnoustie this week and the Scottish links has plenty to live up to after two remarkable renewals here most recently.

Who can forget a sockless Jean van de Velde traipsing through the Barry Burn on the 72nd hole in 1995, en route to losing his lead and a subsequent playoff to home favourite Paul Lawrie? Or in 2007 as nearly-man Padraig Harrington had the Claret Jug in his grasp only to collapse in the watery grave on the final hole before gallantly getting up and down to force a playoff with Sergio Garcia which the Irishman remarkably won!

Carnoustie has plenty to live up to, here are two contenders for Open Championship glory.

A four-time Major winner he may be, but Rory McIlroy has as many questions as he does answers at the moment. And they are all linked to one club – the putter.

Tee-to-green McIlroy is as good – nay better – than almost everyone else on the world stage so far in 2018 but the 2014 Open champion is having a horrid time converting chances from close range on the greens.

It cost him a real chance of the Green Jacket at Augusta in April and, as recently as his last start at the Irish Open, it undermined a great week’s play.

He has good memories of Carnoustie too, having won the Silver Medal here in Harrington’s year of triumph and, by his own account, the putting has been worked on since the Irish Open. With a good week on the greens, and he does have them from time to time, McIlroy could be very hard to beat.

There hasn’t been an English winner of this great Championship since Nick Faldo raised his third Claret Jug at Muirfield in 1992.

The likes of Lee Westwood, Ian Poulter, Paul Casey, Ross Fisher and Justin Rose have all mounted Open Championship challenges in what is a strong era for English golf, but the Claret Jug has eluded them until now.

Relatively new on the scene is Southport’s Tommy Fleetwood, crowned Europe’s number one last season. He is a supreme ball-striker, the envy of so many of his peers on Tour.

He showed it a month ago at Shinnecock Hills with a stunning final-round 63 that saw him coming up one stroke shy of Brooks Koepka’s winning tally in the US Open but it was another vital stop in his Major championship education.

He’s also the Carnoustie course record holder. That 63 came in the Dunhill Links, which he admits will count for nothing his week, but it cannot be a negative at any rate. Regardless, Fleetwood is going to be a Major player on any layout for years to come.