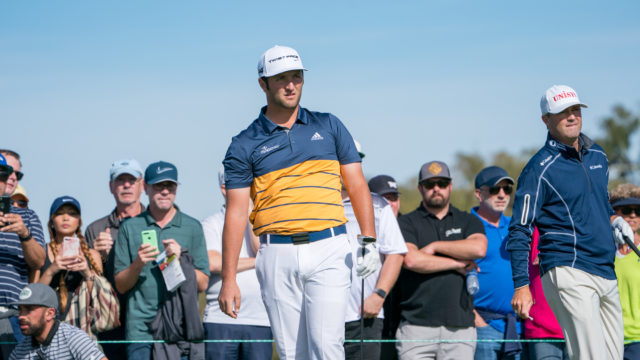 The Desert Classic is centre stage on the PGA Tour this week and it sees defending champion Jon Rahm as favourite.

The Spaniard is market leader at 25/4 and with a top-ten finish at the Tournament of Champions already under his belt this month Rahm is match-fit and ready to roll.

The Desert Classic is multi-course pro-am with the bulk of the action – 36 holes – taking place on the famed Stadium Course, a layout Rahm has declared his love of already.

Having ended 2018 with a tied-fourth in Dubai and a win in at the Hero Challenge in the Bahamas, Rahm should make a bold defence of his title. He ranks some way ahead of fellow market leader Justin Rose.

The Englishman is 10/1 on his first start of 2019 and will be playing for the first time with new equipment, ensuring he looks vulnerable.

Another former winner in the field is Hudson Swafford and he is worth an interest after finishing third behind Matt Kuchar at the Sony Open in Hawaii last weekend. Swafford made plenty of birdies there and that preparation bodes well, given his 2017 win in this event also came after a good showing in that tournament.

He’ll be content coming here to a course where he’s got a history of playing well – with two more top-30 finishes on top of that win.

Charles Howell III has been as consistent as anyone around the turn of the year on the PGA Tour, with his last four results being 1st-tied-3rd-tied-14th-tied-8th. It is the sort of play associated with a consistent ball-striker that often features on leaderboard but the 39-year-old struggles to win, as his three PGA Tour wins in 531 starts demonstrates.

He’s playing superbly well right now however and has not missed a cut here in ten starts since 2007, with top-20 finishes in each of the last three renewals. On current form, he should go close again though it is hard to fancy the win at 18/1.

The 29-year-old American is no stranger to European Tour golf fans, having honed his game over here for a number of years.

Uihlein looks a PGA Tour winner-in-waiting down the line and, while he lacks a recent appearance, his tied-seventh finish at the RSM Classic in November is the most recent evidence.

He posted a top-20 finish in this event 12 months ago and has the game to improve on that now.