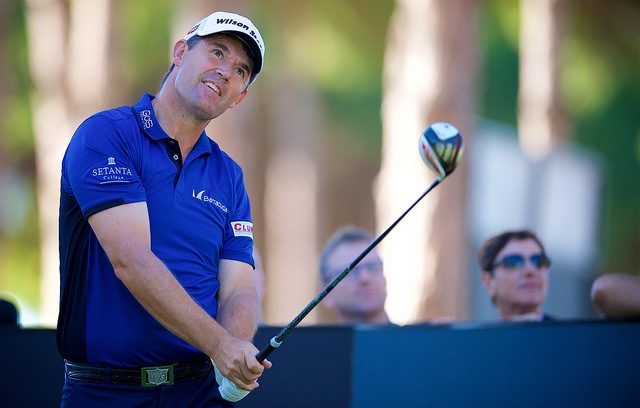 Gullane before the storm! The Scottish Open is the latest event in the Rolex Series on the European Tour and also the final stop-off before the season’s third Major of 2018, the Open Championship at Carnoustie.

Given the proximity to The Open, it is no shock to find a stellar cast has assembled in Scotland to fine-tune their Links game. Here we take a pop on three outsiders for Scottish Open success.

The three-time Major winner expressed his own shock last week that he’d been chalked up at 66/1 to win on home soil in the Irish Open at Ballyliffin. “My performances always go up when it comes to a links course,” said the Dubliner of his outsider rating.

Harrington was tied for second spot after a fine four-under par opening round before unravelling in round two. He looked certain to miss the cut, rescued himself with back-to-back birdies late in his round and then tossed it away again with a costly double at the final hole to miss the halfway mark by one stroke.

Frustrating, of course, but there were signs of positivity, and genuine reason to believe the veteran can contend during this three-week spell in Britain and Ireland. It will be a mini-surprise if he doesn’t catch our eyes again in Scotland, this week or next.

Harrington started with a brace of 68s at Gullane in 2015 and has five top-30 finishes since the Scottish Open reverted to links golf again. He has been playing some tidy stuff in the United States without putting four rounds together, and is worth a chance at a three-figure price.

One man that did finish well in Ireland last week was Jorge Campillo, who shot up the leaderboard on Sunday afternoon and was denied a spot in the playoff by a single stroke.

The 32-year-old has been in impressive form this year and he also posted a top-10finish at Le Golf Nacional in France previously. The Spaniard has been runner-up four times on the European Tour in his six-year stint and will surely make the breakthrough sooner rather than later.

His consistency of late is highlighted by a standing of tenth in the latest Race to Dubai ladder and he’s got some decent form in Scotland to boot, having finished tied-26th and tied-8th in his event recently. With his tail up after last week, Campillo should be raring to go once more.

Sticking with the theme of players that come here in form, former Masters winner Danny Willett is worth a second look. The Sheffield man has suffered from both a loss of form and a problematic back.

This is just the second time Willett has played the Scottish Open since its links return, and his first since becoming a Major winner at Augusta in 2016.

His last start was in 2014 at Royal Aberdeen Golf Club where his four-round tally of eight-under par was enough for tied-11th. Then, Willett started slowly with rounds of 70 and 70 before shooting 68 and 67 over the weekend.

Last week’s impressive effort in Ireland yielded a share of sixth, Willett’s second top-ten in three starts in Europe (he missed the cut at the US Open in between times). At a big price, he is worth a shot on current form with his career trajectory seemingly going upwards once more.