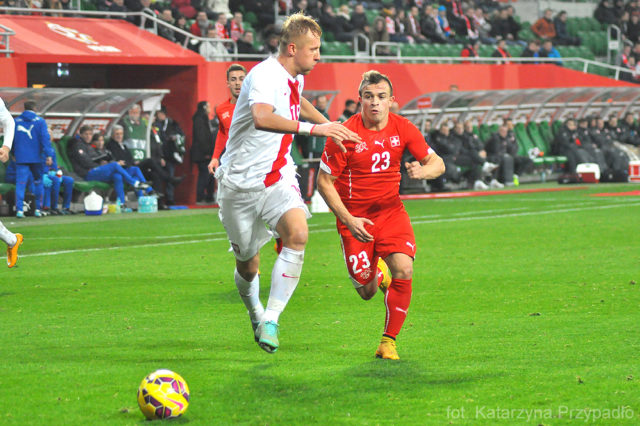 We now know the eight teams that will fight it out in the play-offs for the four remaining European qualifying berths for next summer’s World Cup in Russia.

Switzerland, Italy, Denmark and Croatia (all seeded) will be paired off against Sweden, Northern Ireland, Greece and Republic of Ireland for two-legged ties next month (November 9-11 / 12-14).

On the face of it, the Swiss are probably licking their wounds having won nine from ten qualifiers only to be pipped as they lost to Portugal in Lisbon this week.

Group B was not strong (Hungary, Faroe Islands, Latvia and Andorra behind the front two) but Switzerland showed they are dangerous by scoring eight goals in two games against a Hungarian side that impressed last summer at the Euros.

Having drawn a group that included Spain, the play-offs were always a possibility for Italy. The Azzurri did not impress greatly in their qualifying campaign however and a recent 1-1 draw with Macedonia in Turin will give hope to whichever side is paired with them in the draw.

After a European qualifying campaign that was lacklustre, Denmark have come back to form somewhat this time around. The creative talents of Christian Eriksen are key for the Danes and coming from a group that included the likes of Montenegro and Romania will surely aid them in the play-offs.

For Croatia, this will feel like a needless exercise. They had control of Group I before late defeats against Iceland and Turkey and a costly draw at home to Finland derailed them. They did win in Ukraine to book this slot however and are a dangerous opponent.

Sweden look the strongest of these four teams on paper. They are battle hardened at international level and tournament regulars. Splitting France and the Netherlands in Group A was no mean feat and they will cause problems no matter what way next week’s draw goes.

Northern Ireland have grown in confidence from their Euro 2016 experience last summer and are a stubborn opponent for anyone, but does Michael O’Neill’s squad have the quality to topple a strong opponent over two legs?

With just one defeat in ten qualifiers, Greece once more have the banana-skin potential that will have the seeded teams worried. Like Northern Ireland, they may just come unstuck in the face of better opposition, having failed to win any of their four games in qualifying against Belgium and Bosnia.

The Republic of Ireland have also grown in confidence after their Euro 2016 adventure last summer. Limited in terms of quality, they share similar traits to Northern Ireland in terms of commitment and desire. Martin O’Neill’s team have, however, established a canny knack of upsetting the odds in big games (wins over Germany, Italy and away to Wales, while they gave France a big scare at Euro 2016).

Verdict: Switzerland, top-ranked amongst the eight teams based on UEFA’s criteria, look shaky and may be the team the four unseeded nations most desire. Italy have not convinced of late but who would be willing to back against the Azzurri in a knockout situation next month? Croatia perhaps just shade it ahead of Denmark to be next best behind the Italians.

Having all been at the expanded Euros last summer, Sweden, Northern Ireland and the Republic of Ireland have big-game experience to stand them in good stead next month. Given a decent draw, all three will fancy their chances of an upset. The four seeds may be more willing to take their chance with a limited Greek side.

Queue a draw that pits Switzerland against Greece on this basis!