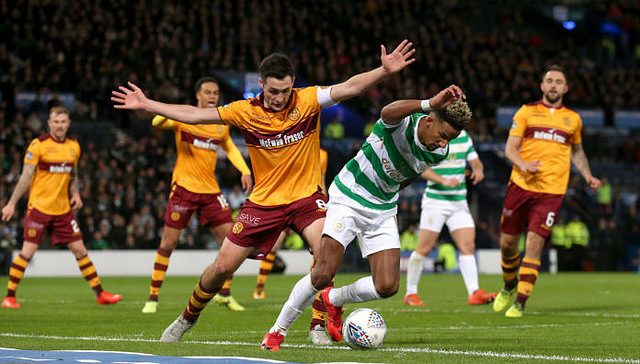 Both midweek fixtures from Scotland’s top flight are repeated this weekend and the clearest path to profit might just come from heeding what we have witnessed once already this week.

For the second time in three days, Motherwell were left feeling aggrieved when a controversial penalty was award to Celtic.

At Hampden on Sunday, Scott Sinclair was adjudged by many to have to have gone down too easily and helped Celtic establish a dominant position in the League Cup final as they ran out 2-0 winners.

Fast forward 72 hours and it was Callum McGregor that hit the floor in the box and referee Willie Collum quickly pointed to the spot.

This time, Sinclair converted the kick in the 89th minute at Fir Park and in so doing ensured Celtic’s unbeaten run domestically was stretched to 66 games.

It would be tough not to feel some sympathy with the Steelmen, given two questionable decisions went against them.

The teams meet for a third time at Parkhead on Saturday where Motherwell are 13/1 to complete the trilogy with a win.

Their record away at Celtic doesn’t inspire the belief they’ll get their revenge here however. Motherwell have conceded nine and scored none in their three most recent trips to the city’s East End.

They’ll likely put up another decent fight but stifling Celtic so effectively three times in six days might be asking a lot.

For that reason the value call in this one is the 1/1 that the second half will produce the most goals.

Both games this week have been scoreless at the break and, if Motherwell do tire late on, Celtic are ruthless enough to exploit it.

Wednesday’s night’s tip that Aberdeen might gain their second win at Ibrox in 26 years went quickly downhill as the Dons turned in a thoroughly turgid performance in their 3-0 loss to Rangers.

It was a seasonal low from Derek McInnes’ side and it is worth wondering if perhaps they’ve been affected by their manager being linked to the Rangers job.

Regardless, they’ve got a job on to pick themselves up for another joust with Rangers at Pittodrie on Sunday.

There was plenty to applaud from the Gers on Wednesday evening and, such was their dominance, they look overpriced at 29/20 for Sunday’s game, having come away from their last trip to the north coast with a 3-0 win in April.

What we did flag up correctly on Wednesday was a run of four red cards in six games between Rangers and Aberdeen. Ryan Christie duly made that five in seven when he got his marching orders in the second half at Ibrox.

Games between these two are so often feisty affairs so 3/1 on a red card being issued on Sunday is perhaps underestimating that fact once again.

Hearts have won their last seven home matches against Hamilton Academical in all competitions and are 20/29 to do so again on Saturday.

Accies, however, have hit some decent form, beating Rangers either side of draws with Aberdeen and Hibs, and can emerge with a point from Tynecastle.

Hearts have failed to win in five games themselves, making the draw a decent bet at 27/10 for this one.