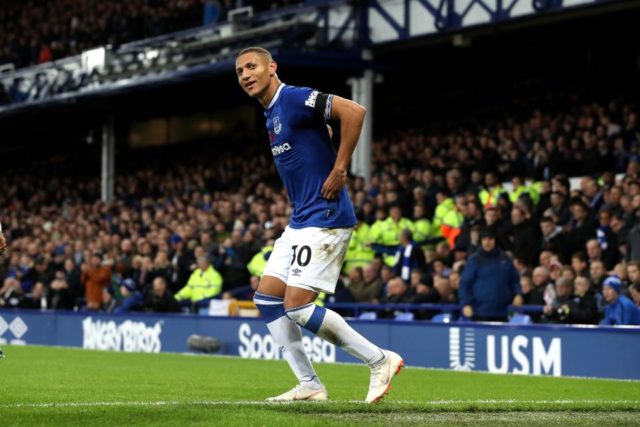 Everton host Watford on Monday night and it will be something of a reunion at Goodison Park.

There’ll be some tension in the festive air, with the Toffees having raided Watford for manager Marco Silva in the summer. The clubs fell out over that move, while promising playmaker Richarlison also swapped places from Vicarage Road to Merseyside soon after his old boss.

The 21-year-old Brazilian has been in fine form for Everton this season. He has scored seven of their 21 Premier League goals, despite missing a couple of games following a red card in August.

The Toffees have managed just 21 goals in 15 games so far, easily the lowest return of any club in the top-eight entering the weekend, and adding a stronger goal threat remains the key challenge for Silva as Everton boss. The likes of Cenk Tosun, so far, simply has failed to cut it as a Premier League goalscorer.

Richarlison is doing his fair share though and everyone knows the likelihood of a former player scoring against his old team, so the impressive youngster is the clear choice to score first in this one.

Both teams need a win. Silva’s side have only won one of their last four in the Premier League and their next game is away at Manchester City, so they could certainly do with banking these three points ahead of that thankless task.

Watford meanwhile have lost four of their last five and each of the last three games. Their record away from home is lamentable, with just two wins from their previous 19 attempts. They’ve also failed to score in 11 of their last 15 away games in the top flight.

Under Silva’s steer this season, Everton have lost just once in eight home league games. They are the safer bet to win this one.

Past form suggests it will be a close encounter. The last six games between the clubs have yielded two wins each and two draws and during that run they’ve not been separated by more than a single goal.

Watford aren’t setting the world alight on their travels, but they are at least proving relatively hard to break down. They’ve conceded eight times in seven away games thus far, the third-best record outside of the top five entering the weekend’s games.

There have also been under 2.5 goals scored in Everton’s last four games, so this could be a tight affair. The 1-0 home win is 29/4, while a 2-1 Everton success is also appealing at 33/4. Either way, there shouldn’t be much in this game at the end.