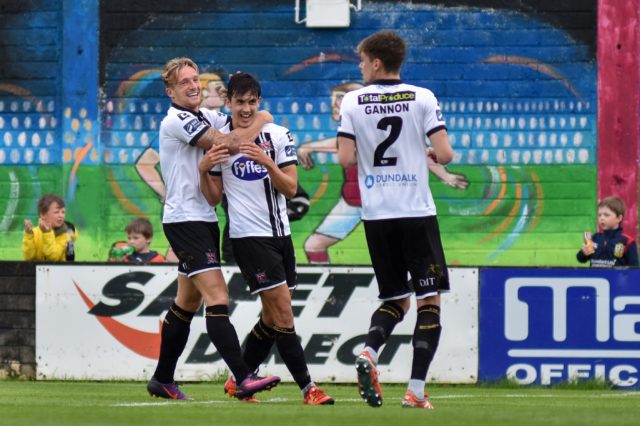 The Europa League qualifying continues this week with Irish sides Dundalk, Cliftonville, Glenavon and Shamrock Rovers among those hoping to progress into the second qualifying round.

It remains a convoluted process for teams hoping to eventually make it into the group stage of Europe’s second-tier club competition this season, with three qualifying rounds and a play-off stage whittling them down over the summer.

Various clubs from minor leagues across the continent will have their eye on a lucrative run to the latter stages of qualifying and, amongst them, are Danske Bank Premiership outfits Cliftonville and Glenavon and League of Ireland hopefuls Dundalk and Shamrock Rovers, who all have big second-leg games on Thursday.

Dundalk are enjoying a fine domestic season in the League of Ireland and sit top, four points clear of Cork below them. The Lilywhites became the first Irish side to draw and win a group stage game in European competition when they made it all the way through to the Europa League group stage in 2016 and will be aiming for something similar this term.

They hold a 1-0 lead over Estonians FCI Levadia and, being at home, are worth backing at 2/5 to pick up another victory to progress.

Glenavon secured an impressive 2-1 first-leg win over Norwegian side Molde and even though the return clash away from home will be tough, they can get the job done and progress, safe in the knowledge that if they breach Molde’s defence again it will surely be enough to give them an aggregate victory.

Shamrock Rovers must overturn a 1-0 first-leg deficit if they are to make the next qualifying round and will be up against it when they go to Sweden to take on AIK.

AIK sit top of the Allsvenskan, the top league in Sweden, at virtually the halfway stage and should have too much for Rovers, who are fourth in their domestic table, 25 points off leaders Dundalk.

Cliftonville are another of the Irish teams who must somehow try to get back into their tie after losing the first leg 1-0. The Belfast side go to Danish team FC Nordsjaelland, who boast much more experience at this level and managed to make the group stage of the Champions League as recently as 2013.

With that in mind, expect the Danes to dominate from the start and dispose of the Northern Irish minnows.

Among the other sides expected to progress out of a hectic 43 second legs on Thursday are Maribor, who are 1-0 up against Partizani Tirane, while Slovan Bratislava should build on a 4-2 first-leg success over Milsami Orhei and Polish side Lech Poznan, who hold a 2-0 lead over Gandzasar Kapan.