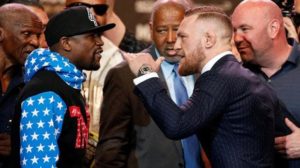 Floyd Mayweather and Conor McGregor will lock horns in Las Vegas on Saturday night and it is the veteran American that should be feeling more pressure.

McGregor, with a 49-0 career record and the well-earned tag as the best pound-for-pound boxer of his generation is, at 40, stepping into the ring with a complete boxing novice.

The veteran is 4/17 to win the fight and for himself and the wider boxing community it is almost unthinkable that he could lose this tussle to the UFC superstar.

McGregor will be making his first professional boxing start. The Irishman has talked a fine game in the run-up but he has effectively had to learn in a few short months the skills that Mayweather has been perfecting his entire life. For boxing as a sport, credibility is on the line at the T-Mobile Arena.

The bare facts scream that Mayweather’s supreme technical ability should win out. In theory, he should simply be able to outfox his opponent, who will effectively be doing things counter-intuitively to how he has made a brilliant career for himself in the UFC Octagon.

It looks to most observers like Mayweather should be able to rubberstamp his career by halting McGregor and brining up a half-century of wins in style (Mayweather to win in rounds 4-6 @ 9/2). There must also be serious questions over McGregor’s ability to sustain 12 rounds against the Mayweather ring craft and tactical acumen.

For that reason then, any hope 7/2 underdog McGregor has of winning surely rests in his ability to stop this from turning into a legitimate boxing match. That is to say, McGregor’s best approach may be unconventional. To do none of the things that boxing purists would expect and to do his level best to make this into a brawl, something that would remove Mayweather from his comfort zone.

If McGregor is going to win the fight, then surely his best (possibly his only) chance is to do so by knockout (McGregor to win by KO, TKO or Disqualification @ 29/10).

The Dubliner has a real habit of living up to his often outlandish predictions and he says he can stop Mayweather inside one round (priced at 22/1).

It will be a remarkable feat should he pull it off, some feel it almost unthinkable that a rookie will end the perfect career streak now. Mayweather should be able to stop this opponent, all things being equal (Mayweather to win by KO, TKO or Disqualification @ 20/31).