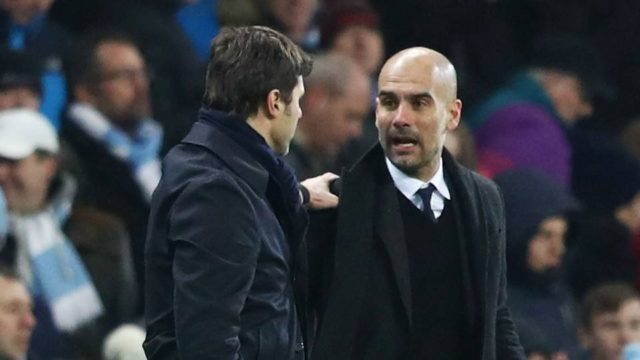 Manchester City have had a bad couple of weeks and I think they could suffer another setback at Tottenham.

Having been virtually infallible all season, the Citizens have been eliminated from the Champions League by Liverpool and lost to Manchester United, squandering a two-goal lead in the latter.

It means Pep Guardiola’s men head to Wembley on the back of three straight defeats and judging by the way their players have reacted during their losses, with bruised egos aplenty.

Guardiola’s first defeat in England came at the hands of Spurs at White Hart Lane in October 2016 and they now appear just as formidable at Wembley.

Tottenham are unbeaten since losing at The Etihad in December and a victory today would see them become the eighth club to win 900 top-flight home games.

I really fancy Mauricio Pochettino’s men to do a job on City and 7/4 seems a superb price for the home win.

Elsewhere in the Premier League, Swansea can do themselves a favour by beating Everton.

The Swans missed an open goal – both literally and metaphorically – by failing to win at West Brom last week but the Toffees seem to have lost interest in their season and at 31/20, Carlos Carvalhal’s men look too good to ignore.

Finally to the Championship and Nottingham Forest can take advantage of Ipswich’s woes.

The Tractor Boys are without a manager after Mick McCarthy’s resignation in the aftermath of the midweek win over Barnsley and 5/6 looks a sound price for a clean sweep of home victories.